So, I’ve gotten a lot of great feedback on the last post, Ban Síde. Thanks to everyone who’s commented or popped me a message on Second Life or Facebook or even Skype about it. And a couple of people have asked me how I came up with such a wild story for Gwyneth to have to deal with in this blog.

Now, some looks start with wanting to showcase a great outfit, but for the most part, I don’t get my inspiration that way. I put Gwyneth or TAC or Davey into a situation, and then I use that situation to showcase some great stuff I’ve found recently, or some new skin I want to blog, that kind of thing. 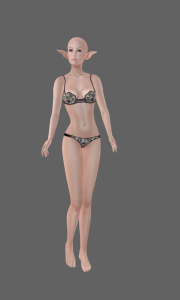 Gwyneth as I often see her.

So, here’s Gwyneth as I often see her. Well, OK, I usually don’t bother with the undies, but, you know. Family blog and all. Almost all the time, Gwyneth is in the Maitreya body, which takes the small-breasted Sidhe look very well, and lately I’ve been putting her in the hands and feet that come with the body, rather than swapping her into the SLink ones, since so many shoes are being made for the Maitreya now. Gwyneth’s base skin is almost always from Lumae, and the standard skin for her for the better part of a year now has been Lumae‘s lovely Eirtae in Tone 1, which is very light and in keeping with her Sidhe Celto-Irish background. For some time now she has been in the BentBox Sylvan Ears, though I may switch her back to the Lumae Leevi ones at some point. Her base head has recently been the Catwa Dyana, which offers a shape I quite like.

Now, like I said above, most of the time, I think of a story or situation, and then I just put the avatar in something that works with that story.

But this time, the whole thing started with a dress.

It’s been my privilege to blog for The White Armory for about three months now, and I have had a great time showcasing as many of their beautiful designs as I possibly could. When TWA started up its new collaboration with Blue Moon Enterprises, Silvan Moon Designs, I was really excited. Such a rich palate of gorgeous textures and amazing dress shapes! So when this one, Aquella, came across, I first thought the pictures looked amazing, but then when I put Gwyneth in it, I wondered, “When would Gwyneth wear such a thing?” I put it away, then tried it on again a few days later. And suddenly, it just came to me. Gwyneth couldn’t wear this dress in her own life. She would have to have an alternate life, one in which she could wear something like this. Now… who would wear something like this? Revealing clothing, unless it’s made of flowers or intended to knock her Consort’s virtual socks off, isn’t really her style. But what if she were someone else? 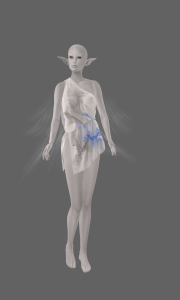 What if Gwyneth were even more supernatural than she already is?

What if Gwyneth were even more supernatural than she already is? What if she were some kind of elemental spirit, but in keeping with her heritage and culture? I could take the opportunity to showcase one of Lumae‘s excellent fantasy skins: this one is the Fable, Nimbus. Lumiya Rae just released some appliers for the BentBox ears in the Fable tones, as well. Score! Now… what sort of creature would have skin like this, a ghostly apparition of a woman?

Well, a Bean Sí, of course. A Banshee. Now, often Bean Sí are depicted in art as hideous apparitions, but in fact all that folklore tells us is that their job is to keen for deaths, often of important chieftains. In fact, Bean Sí can appear any way that they want to appear. They generally have long, disheveled hair, though, so I started going through all the hair I would love to blog from Hair Fair, in hopes of finding something perfect.

Mina came through with the lovely Neah hair. At this point, I also decided to put Gwyneth into the SLink Pointe feet, just because I like them and I knew I had some fab shoes for them … somewhere in my inventory. I figured I wanted something to wrap around her legs, the right pair of shoes, and maybe a circlet or something, and then I’d be good to go. Now, there are some great textures out there in hair land, and Mina‘s never disappoint: this hair looks lovely in just about any colour, and when you work with very light hair colours, the textures always show through, so it’s very important to me that hair textures be as close to perfect as possible. It’s one reason why I love Analog Dog so much. Another top contender for my list of favourite hair textures would have to be EMO-tions. No Match is also doing some amazing things. But Mina was the perfect style for this look. Now I just had to find leg wraps and shoes!

Funny thing about these leg wraps….

Funny thing about these leg wraps… they were already in my inventory: I’d just forgotten completely about them. I asked over on SL Blogger Support if anybody knew of good ballet shoes for SLink Pointe feet that include long leg wraps, and someone mentioned that there were some good ones at We ❤ RP’s current round, from Empire. So I duly went down to We ❤ RP to check them out. Luckily, I thought to make sure I hadn’t already bought them when I saw what I was looking at—sure enough, there they were, already in my inventory.

And I remembered I had some fab shoes for Pointe from a previous Fantasy Collective, so I popped those on. These are the ChicChica Fairy shoes I ended up putting on her for the blog post, but initially I didn’t want to use them because they had a metallic look to the laces and she wasn’t wearing anything else that was metallic. So I did some searching around, but I didn’t find anything I liked better. That meant finding something else metallic to balance out the look.

A circlet! This one is a gacha from I forget where, made by Coquette, the Fairy Crown. It’s simple lines really contributed to the look and matched nicely with the laces on the otherwise simple ballet shoes from ChicChica.
Somewhere along the way, I realised I wanted to change Gwyneth’s ordinarily bright blue eyes to something more ethereal. Luckily for me, the fatpack of Soul‘s Sidhe Eyes comes with an exclusive colour, Holy. So here we have Gwyneth as a Bean Sí, in the lovely paper-white Nimbus skin, part of Lumae‘s Fable range. The Mina Neah hair frames her face beautifully, and I love the balance of inverted triangles with the hairline and the Coquette circlet. The silver-white Holy eye colour brings it all together. I did consider making her eyelashes white, but when I tried lightening the lashes beyond a certain point, they just looked more creepy than I wanted, so I decided that even Bean Sí go for black mascara! As always, she is in the Maitreya mesh body, and today she is sporting the Catwa Dyana mesh head. It’s her favourite head lately, though I am hearing great things about the Bibi and can’t wait to try it out.

Here’s a closeup of that gorgeous dress!

Here’s a closeup of that gorgeous dress that started me down the creative road to turning Gwyneth into a Bean Sí. In case you’re wondering about the various spellings of Bean Sí, the word in English is Banshee. The title of the post, Ban Síde, is the word in Old Irish, and Bean Sí is the word as it’s spelled in Modern Irish. I thought Old Irish was most appropriate for the post title, but then given that we’re speaking in 2016, I figured the Modern Irish equivalent would be best here. Call me pedantic. I’ll just agree with you; it’s OK!

Now, speaking of the gorgeous dress, it’s the Aquella Marina dress from Silvan Moon Designs, which is a collaboration between the creative geniuses at The White Armory and Blue Moon Enterprises. The dress comes in Gray, Green, Pink, and Turquoise; the Pink and Turquoise are exclusive to the Fantasy Cream event. They are beautiful. Gwyneth is wearing the Gray here.

Now, of course, the blog story ends up with Gwyneth-the-Bean Sí diving off a cliff and surfacing on a beach somewhere, then walking up a very long boardwalk to whatever she’ll encounter next. That means I get to put another gratuitous photo of Gwyneth in this dress in the post!

That means I get to put another gratuitous photo of Gwyneth in this dress into the post! Now, she’s back in her blue eyes, the Lumae Eirtae skin (tone 1), and she looks just like herself, though the smile on the Catwa Dyana looks a wee bit doubtful; then again, I’m sure she is feeling a bit doubtful as she goes on to whatever’s going to happen to her when she gets to the top of that boardwalk….

Don’t forget: Hair Fair is open for five more glorious days, until 31 July, and you can pick up the Mina Neah hair there, along with a tonne of other amazing hairstyles. Remember that every hairstyle you buy at Hair Fair donates a percentage of the price to Wigs For Kids, so you’re donating to a good cause and getting great hair at the same time! What could be better than that? 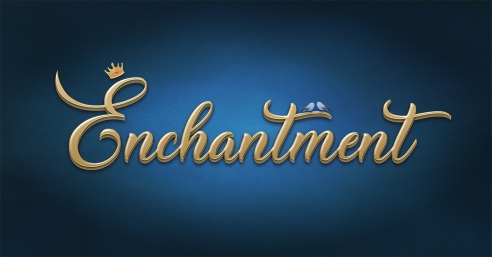