In the Troll’s Shadow

You have no idea. “Gosh, is your father also your uncle?” “Do you all grow so tall because of troll manure?” “I heard you secretly worship the troll and are trying to bring him back to life.” “I figured you’d be covered with dirt or drool or something.” “Wait, do they even allow people from Trollhaugen on the Internet?”

Oh, very funny. I’ve never heard any of those jokes before.

Yes, I grew up in Trollhaugen. Yes, I also went to University. Yes, I was once Miss Trollbride. Yes, I know how to spell. No, I do not intend to marry a close relative by blood. No, I do not enjoy rolling around in excrement. Satisfied? No?

Well, you can just bite me.

Well, you can just bite me. If it weren’t for the fact that my homeland is built around a large troll turned to stone by our Realm’s spiritual founder, Saint Megan of the Book, I probably wouldn’t even exist right now, because my ancestors would have been eaten by that same large troll, who then would have probably moved on to your homeland and eaten your ancestors, because when you eat as much as a troll, renewable resources dry up pretty quickly.

Yes, I was once Miss Trollbride

Yes, I was once Miss Trollbride. That’s a picture of me in the dreaded earring cage. Being Miss Trollbride is actually a huge honour, I’ll have you know. We beautiful maidens spend a whole night in that godsforsaken cage, all to remind everyone that there but for the grace of Saint Megan go we. And it’s not exactly a comfortable night, by the way: you’re so high up in the air and swinging back and forth, to say nothing of the way they actually get you up there. Let’s just say it’s creepy, even when you know there is no more snot up there, not to mention earwax. I’d say I still have nightmares about it, but that would be dramatic.

The fact is, Trollers love nothing more than books.

The fact is, Trollers love nothing more than books. A book saved our Realm—well, many books, and there’s nowhere in the multiverse where you will find such a love for them. Maybe we don’t have huge libraries here, and maybe there’s no University, but we are a Realm of storytellers and story listeners. I mean, growing up in a place like this is a little bit like having grown up in a fairy tale.

And maybe that’s why people are so condescending of us.

And maybe that’s why some of us are embarrassed to be Trollers.

I’m a combination of both, I guess. Having spent a few years Out In The World, I do know that people from Trollhaugen are looked upon with some disdain, much as people on the Internet look down on unwashed pieceworkers from Nebraska who happened to grow up next to Carhenge. First of all, Hugh (that’s our troll’s name) is much, much bigger than Carhenge. And second, we didn’t ask him to come here. We didn’t make him. Nobody looked at our Realm and said, “Golly gee, I think I’ll erect a big old Troll!” No. We defeated him. So take that, Alliance, Nebraska.

Fact is, Our Troll is Beautiful.

Fact is, our Troll is Beautiful. OK, he is beautiful in a looming, grotesque sort of way, but my people have turned him into something that is known throughout all the many Realms. And you would not believe the number of Amazing Authors, Poets, Storytellers, and Artists of all descriptions who have graced our Trollmouth with their words and images. As writers’ retreats go, Trollhaugen is unique, and even though most of our people are deeply involved with the land, that love for the earth also, we believe, creates a keen understanding of the truths that tie the universe together with stories.

There are also no finer views to be had of neighbouring Realms than those from our Trollsteps. I am in these pictures for scale, by the way: I am a tiny little blonde head in a black dress and you probably can’t even see that I am scowling at you in this picture. In the morning, I love to climb up the steps and watch the sun illuminate Tensor’s Flying Market in the distance. I can’t imagine what it would be like to live there: all that lightning. I heard they dance with Goblins.

Look: Here is my Scowl Face.

Look: Here is my Scowl Face.

So, yes. I am from Trollhaugen. This is my mother’s house, and behind me is hay to feed our single horse. My mother is a blacksmith, and a good one; without her, I would never have been able to leave Trollhaugen for university. And without St. Megan of the Book, neither one of us would be able to tell our tales.

St. Megan of the Book

Trollhaugen is one of sixteen regions created for the 2019 Relay for Life of Second Life Fantasy Faire. Trollhaugen is home to this year’s Literary Festival, where some wonderful writing events have been scheduled. Trollhaugen is sponsored by the Lost Unicorn Gallery and designed by Beq Janus and Elizabeth Jarvinen (polysail). The Faire closes on the 5th of May, so make sure and visit Trollhaugen before it fades back into the Mists. 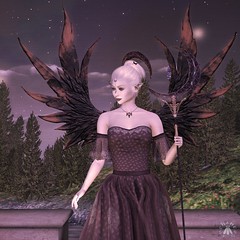 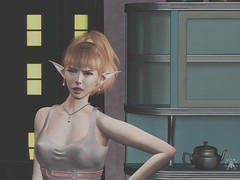