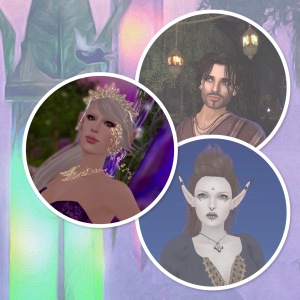 I awoke to near summer twilight: all the birds in the Great Seelie Forest were still.

A quiet morning in the forest? Not at this time in the year’s cycle.

Still, my morning routine, such as it is, involves a dip in the pond and a walk through the forest to commune with my trees and my animals and my demifae.

But overnight, the forest had changed. Paths twisted and turned beyond where they had gone before. And standing where once stood my circle of stones, a fae structure, lit with the green light of summer.

And, standing where once stood my semicircle of stones, a fae structure, lit with the green light of summer, topped with iridescent scales dancing in the morning twilight.

My trees. My beautiful trees. A bare meadow lay behind the giant trunk of the treehouse, dotted only with Renata’s cave, a pond now somehow different, and in the distance…. what was that in the distance? Discovering my own garden once again with the advent of summer, I flew across the treeline….

Discovering my own garden once again with the advent of summer, I flew across the treeline….

And discovered a field of shimmering flowers. A larger stone circle, ringed by massive fae mushrooms, the sort that towered over keystone and altar. Mist rose from the stones, and a glimmering, magical light encompassed all.

The flowers seemed to stretch for ever, into another treeline in the distance.

For some reason, all this made me furious. My forest. My clearings. My lady statue. All I could think of was the rebuilding to be done, even as I took in the scent of the shimmering flower field before me.

Nothing to be done, not now. I flew to Mysthaven. I flew to Mysthaven, where I found Dyisi casting cards and Lilacor reclining on a bench.

I flew to Mysthaven, where I found Dyisi casting cards and Lilacor reclining on a bench. He has been troubled by dreams sent no doubt by that creature, Gwythyr. I cannot even say his name in a way that makes it sound ugly: all things are music on the lips of the Queen of Faerie.

Nathaniel told that reporter from FaeWatch that he thinks I am sometimes frustrated with the fact that I can no longer curse like a sailor and stop a conversation with a word: it doesn’t matter what words I say, they end up being poetry, and it doesn’t matter how angry I am, I sound like Glinda the Good Witch.

And I couldn’t bear the thought of sitting on a hard, cold, stone bench, so I asked for appropriate seating.

Everything is fucked up. Everything is wrong. Crackling power goes through me and turns my anger into a caricature of itself. But why, why, why, did the power of my hand send me a pink boudoir with a fucking French bulldog?

Fucking pink couch. Fucking pink table. Fucking BUNNY RABBIT. And a French bulldog? I do not even like dogs! The damn thing would not stop licking my toes.

To add insult to injury, when two fae servants appeared and attempted to serve champagne and petits-fours to everyone, Lilacor (that cantankerous beast!) shuffled off to bed, and Dyisi explained once again that eating and drinking were beneath her.

OK, the cupcakes were amazing, but I probably should have stopped after six.