Gwyneth and Nathaniel fell in love.

Gwyneth and Nathaniel fell in love. Even though Nathaniel was a vampire and Gwyn was a Seelie Fae, everyone knew it was the right match. Then one day, Queen Isabella returned and revealed herself as a Goddess, breathing life into Nathaniel but letting him keep his immortality. His Fae heritage was much stronger than he had originally thought, but that would only be revealed in time.

One Day, King Alec came to talk to Gwyneth and Aoibheann.

One day, King Alec came to talk to Gwyneth and Aoibheann. It was time, he said, to explain the reasons behind everything that had happened. As it turned out, King Alec had, at the time Tabitha hid her two children, been the powerful sorcerer behind the Welsh witch’s magic. He had observed all the hiding and conspiracy, and he had caught up with Tabitha and arranged for her to go to the northlands and be reunited with her lover. Although the two were happy together, they never bore any other children. But Alec and his wife, the Goddess Isabella, sought out the twin girls and watched them as they grew, paying special attention to those important places in their lives when tragedy or inspiration might strike. Isabella herself had whispered the truenames to both Gwyneth’s grandmother and Aoibheann’s friend, although she did not foresee what would happen to either of them in the days and years to follow. Alec, whose magic was great and powerful, transformed himself into the Boatman in order to save the two girls from certain death.

Aoibheann fell in love with a Seelie King.

Aoibheann fell in love with a Seelie King. At first, she thought their love was doomed, but when Alec told Gwyneth and Aoibheann the story of their birth, she rejoiced, for as a full-blooded Sidhe, she could court and consort with her lover.

Gwyneth and Aoibheann were thrilled to find out they were twins!

Even though they looked nothing alike, Aoibheann and Gwyneth were so happy when they found out they were twins! They spent many long hours learning more about one another and thinking about the future and what it would hold for them. It was still a sadness to both of them that their mother and father had never really known them, but King Alec insisted there was a way for them to have the family they had always wanted. 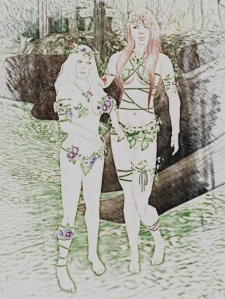 Gwyneth and Aoibheann were dressed in flowers.

Search as he might, King Alec could not find Tabitha and her lover, whose name was never revealed. And so one day, he and Queen Isabella dressed Aoibheann and Gwyneth in flowers and claimed them as their own, making them equal Princesses of the Realm.

Aoibheann’s coronation crown was made specially for her by skilled Fae jewellers.

They each were given special crowns and told that once Alec and Isabella grew bored of ruling in the new land, they would become the Twin Queens, and whoever they chose would rule alongside them. Of course, their choices were already made. 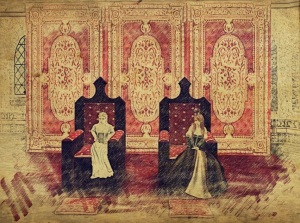 Sometimes, the two Queens held court together, and sometimes Gwyneth and Nathaniel held court. Aoibheann’s beloved Fae King was already tired of ruling, and he chose not to hear matters of the court, but he was always available to help make decisions that benefited the people and served their interests, for he was a good and true King.

While the official residence was a huge castle in the new land, Gwyneth and Nathaniel spent most of their time in a manor by the sea, while Aoibheann and King Llwyd stayed in in the beautiful light forest that covered the new land. 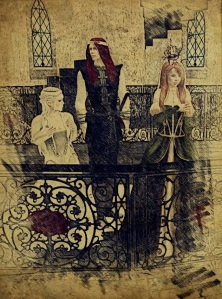 The official residence was a huge castle.

Aoibheann and Llwyd had four beautiful children, including one set of twins. Gwyneth and Nathaniel, whose father was revealed to be a full-blooded Seelie Sidhe, did not have any children, but their friend Valene, the Queen of all the Cait Sidhe, kept them busy with the many Cait who came in and out of their lives, so they were never lonely. Even though they worked together and ruled together, the two sisters remained the best of friends as they danced agelessly through the beautiful kingdom they ruled together. Aoibheann could hear the smallest noise in the forest, and Gwyneth always knew what was going to happen next week, even if she wasn’t sure about the next ten minutes. And their loves danced along with them, through all the days and years of their rules, until they too decided it was time to just relax and enjoy things, when Aoibheann and Llwyd’s children were old enough to rule the kingdom. And they made sure always to keep a lively tavern going in the village, so that any newcomers would feel welcome, and any strays would have a warm place to sleep and a good meal when they arrived. They even called it the Lucky Leaf.