Hottest summer anyone can remember.

This year has been something else. It’s been the longest, hottest summer anybody can remember. And here I was, thinking I was the luckiest Naiad alive: spend a summer studying folklore and literature in Paris, get to know the Nymphs of the Seine, practice my not-very-good French on a city full of every kind of being you can imagine. So I’m packed into a student flat on the top floor of what would be called a flophouse in any other country but here is called a “mansion” (it is to laugh). With four other Nymphie-types, one of whom is a fire elemental and is loving this weather.

I, however, am not. I spent evenings out on the open roof, and then sometimes I climb up a little higher if I need to spend time in what wind there is.

Rain had been in the forecast for days. I got home from class, hiked up the five flights of stairs, and immediately walked into the shower—fully clothed because I was really not feeling patient—then out onto the roof to get some air. Dark clouds fell across the sky.

Dark clouds fell across the sky. I looked up hopefully. Sometimes we Naiads have a sense that can tell us when rain is coming, and my fingers were tingling. This could be the night!

This is probably the last summer I can ever do anything like this. With Britain leaving the European Union (and whose stupid idea was that, anyway? I wasn’t even old enough to vote at the time) next March, there will be predictable problems with student visas, particularly if you’re classed Supernatural. There is even a party in the UK that wants to restrict the Supernatural population only to “indigenous British, Irish and Welsh species,” which makes absolutely no sense at all. So I’m having no fun because it’s too hot, I can’t get to the river enough because my course load is so heavy, and there’s no rain.

Finally, there was thunder, and then the rain started. Oh, yes!

I climbed up onto one of the chimneys.

I climbed up onto one of the chimneys. Here, you can see the expanse of the city spread out below you, although at night it becomes Paris At Night, which is kind of dingy and dark, but it’s Paris, so people think that’s romantic.

Rain was falling in earnest now, and that made me feel alive and free and at home.

Right now it’s hard to feel at home anywhere. I mean, the Supernatural Ministry is arguing that water and tree spirits, Naiads and Dryads, have precedent because water and trees occur everywhere, but the Preserve Our Paranormal Party (the party of P) thinks we have our origin in Greece, so they want to deport us all to Greece. Greece? What would I do there? I’m a British citizen. I don’t speak Greek. And some of the Continental supernaturals are downright snobby. Kind of like the POPPs want us to be. Of course, because it’s a grey line with me, the other supernatural races who are under threat think it must be easy for us, so I don’t fit in with them either.

Caught in the middle.

Caught in the middle, that’s me. I don’t belong in Greece. But if the POPPs have their way, I won’t have a home in England either. What happens to me? It’s easy to get into this vein where I feel sorry for myself and just want to dive into the Seine and never come out (thought that’d be a bad idea; it’s muddy down there).

Eventually I wandered back to our balcony proper and just sat.

Eventually, I wandered back to our balcony proper and just sat, enjoying the water pooling under my body, the rain on my feet, the rain everywhere. It showed no signs of stopping.

“I’m going to close the window now, Gwen,” said Kari, the fire elemental. “This humidity is fucking with my mojo. You coming in?” She chuckled as she spoke, probably anticipating my response.

“I might really sleep out here,” I replied. “This is heaven for me, you know.”

“Suit yourself; I’ll leave it unlocked.” Kari shut the window. Dancing was the best solution

I made my way down to the upper roof and just decided dancing was the best solution. I have six months to worry about what to do in March. Maybe they’ll change the whole thing and make it OK for England to be my home as it always has been. Maybe I’ll have to take a crash course in Greek. I can’t do anything about it here, can’t do anything about it now, so why am I ruining this glorious rainstorm by dwelling on it? I didn’t even let my mind wander onto the environment and reason why this summer is so hot. It would only depress me further. 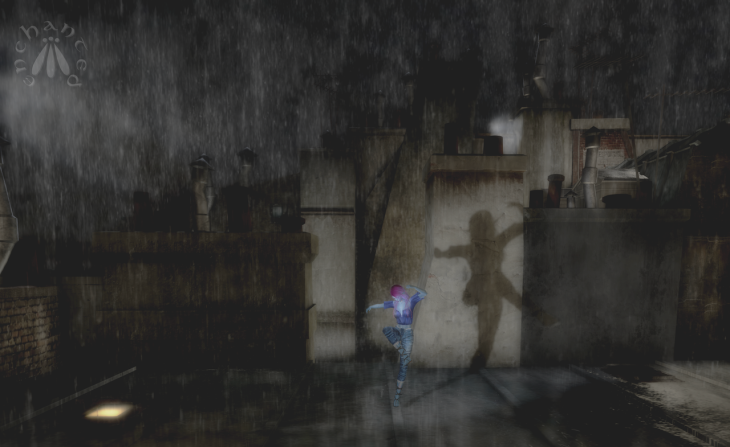 No, no use to dwell. Better to dance. Better to let the water take me over. I only have a few weeks left here, and then it’s back to cloudy Cambridge and the Lit department at Anglia Ruskin, where at least nobody stares at me like I ought to be deported.

NB from HM Queen Gwyneth: I have no idea where this dream came from. It felt very much like the world I used to live in, only with supernatural elements disclosed and some unthinkable idea that the UK would ever leave the EU, which would be the dumbest thing ever, and nobody would ever allow that to happen. It was like living in some bizarre dystopian novel preface, where humans made every stupid decision they possible could and the author couldn’t pick the ones they liked best, so they decided to just throw them all in there. Climate change, Xenophobia, and this terror that World War III was on the horizon brimming in my mind. I obviously have more darkness and despair in my subconscious than I ever could imagine in waking life. Beginning to wonder if the dreams really are nothing more than just my mind doing what-if somersaults at night.