I tried to talk to Aoibh, find out what was going on in her head. In retrospect, maybe I should have just taken her to Val’s den and stayed with her until Val showed up.

Aoibheann hasn’t been right since the Sluagh turned her to stone. That I knew. I have not had much chance to talk to her since that happened: and really it’s only been a day or two. But I did know she wasn’t all right. How not all right she was, I couldn’t have guessed until we started talking yesterday.

I say we started talking: I tried to talk to Aoibh, find out what was going on in her head. In retrospect, maybe I should just have taken her to Val’s den and stayed with her until Val showed up.

She was too — bouncy, too focused, not like my Aoibh at all. As we talked, it turned out that she wants to kill the Sluagh: Braeden, Sir Stinksadeath, Fucker of Minds, whatever you want to call him. I thought I was beginning to acclimate to the fae state of mind, but that doesn’t mean I have to like it. I can’t picture myself so removed from humanity as many of them seem to be. My conversations with Tegan suggest this is because I’m young: maybe when I’ve seen generations of humans die and watched their lives unfold from my position of agelessness, I will think differently. But for now, though I find myself able to understand and appreciate fae logic and motive most of the time, I cannot identify with it. This must be what it feels like to move to a foreign country and be expected to assimilate. But without language and culture courses. I have a basic understanding, but I’m sure I miss so much. I speak Pidgin Fae.

For once, Gwyn’s the brakes on the crazy train. “You know I’m not letting you go alone,” she says hesitantly. “I won’t, because I’m worried about you. I just think there might be — I don’t know. We could find Valene. She’s powerful. We could appeal to the Queen.” But in her heart, she knows what’s going to happen next. She takes a step forward. “I’m just saying it’s not the most thought-out plan I’ve ever heard.” Says the fae who accidentally summoned a demon earlier today. But that’s not a story for now.

Aoibheann outlined the following plan. We’ll go someplace scary, she said. Search for the Hunter, she said. You could make little scared noises to get his attention, she said. He likes those, she said. Great. My best friend has lost her mind, and instead of letting me help her (not that I was thinking I could do all that much, really), she would like to use me for bait in a plan that is pretty much calculated to get us both killed, or worse. First we find the Huntsman, she said. Then we kill Braeden, she said. Then we Free Llwyd. When I suggested maybe we should appeal to the Cait, or the Queen, Aoibh all but threatened to just go on without me, blithely searching for the Hunter so she could in turn find Braeden and kill him.

Even though Aoibheann gets into these scrapes all the time when I’m not around — how else did she get involved in the whole Hunter – Llwyd crazy triangle? — I just didn’t feel right, letting her go off on her own. Because she just wasn’t right in the head. So I started following her.

We didn’t even make it out of sight of the cavern entrance.

Braeden approached from the bridge, I think. He might as well have popped in out of nowhere: that’s how prepared we were for him to show up right then.

Braeden approached from the bridge, I think. He might as well have apperated: that’s how prepared we were for him to show up right then. It was obvious Aoibh was cross, because this wasn’t going according to her plan: it was Huntsman, Braeden, Llwyd, not Braeden showing up out of nowhere to torment people because he’s an overmuscled sadist with a wingspan about as wide as the Thames. The guy takes pleasure in looming, I swear. He didn’t hesitate to get close to us quickly and start pacing. It used to piss me off when my male caretaker paced while he was on the telephone. Now I’d do anything to see his little wanderings again, now I’ve seen Braeden pace relentlessly back and forth as if he’s following some gigantic, infernal tennis match. 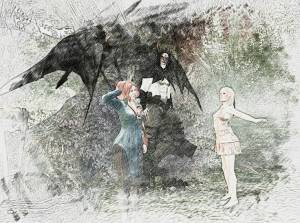 “I want to kiss you again. It was … rarely delightful.”

I pulled up my glamour so I had the guts to speak. I told him she still wasn’t all right. He said he wanted to kiss Aoibh again, and he told me to drop the glamour as he found it insulting. That’s rich, I thought, coming from a magicked up motherfucker like you. Instead, I put myself between him and Aoibheann and reminded him we are all glamour, aren’t we? I thought I would disarm him a bit with candour, told him my glamour was more so I could speak through my fear of him than any other purpose. Of course, he liked that: like any of those dark things he feeds on fear. I’m beginning to think that admitting fear and using it to imply naïveté on my part might be the best defence to use against these creatures: it seems to please them, and it gives me time to think, at least.

Aoibheann didn’t react in her usual way: she spun round and demanded that he tell her what he’d pay her for a second kiss. My old, more human self would have told him to fuck off, stood her ground, and gotten gutted for her trouble; I’m sure of it. But I didn’t do that. I simply explained to him that I loved Aoibheann and I would prefer he not hurt her again.

That’s when the threats started. He told me if I didn’t go with him (to somewhere he hadn’t mentioned yet) he’d never stop tormenting us and he’d make me part of his army. As an aside, I’d make the shittiest Sluagh ever. They’d probably kill me during basic training, or leave me for dead outside King Gwythyr’s personal chamber. Yeah. We won’t think about that.

Just like that night with the scary demon angel lady and Padishar, Aoibh started screaming, “Gwyn is MINE!” over and over again.

Aoibheann sort of cracked after that. She started screaming, just like that night he turned her to stone, like she did with the scary demon angel lady, “Gwyn is MINE!” Over and over again. I thinks he started to threaten him, but then he got right up in her face and demanded she tell him what she’d do to him. I knew I had to do something; I just didn’t know what.

He told me he wanted to take me to meet an ancient friend of his, followed up by asserting to Aoibh that he planned to take me to the Huntsman. Yeah; that’s a place I never want to be again, not even in freaky dreamland. But I figured I had one shot, and this was when to take it.

“I have such sights to show you…You will be better…than the filth of these lands, the filth that intruded upon and desicrated our once lovely land “

I said, “Perhaps her pain is amusing to you; that tells me something about you, I suppose. But she is my friend, and I love her. I love her more than anything in the world; she has stood by me no matter what. Please stop now. If you want me to go somewhere with you, I’ll do that. But Aoibh– she breaks. She’s broken. Please don’t smash her any more.”

That interested him. He wanted to know what I could tell about him. He said Aoibh and I were like two little dogs lost in a world larger then their minds. Which made a kind of fucked up sense. I told him I thought he was a dog too, only he was the dog that got trapped by some sadistic arsehole and tortured until the only thing he knew how to do was bite. Then, like he might do to the white king pushed into a corner, pinned by his own queen and an opposing rook, he offered me a deal. He said if I didn’t want my friend further broken, I could agree to come with him. Fine, I said. I asked him to swear. I made him promise that he would not torture Aoibheann any more.

And he did. I could feel the words binding him up as he spoke. He promised no harm would come to Aoibh. All the while she had been protesting, telling me not to make a deal with him, but at those words she started laughing. I said nothing of it and showed no reaction except a sharp glance in her direction, but I took the agreement. And now, Braeden is bound not only not to hurt Aoibh, but he has effectively named himself her protector. I did not make that explicit when I put my hand in his to seal our agreement; I just know what the words and the oath will do. I agreed to meet the Huntsman. Braeden agreed no harm would come to Aoibh.

He said his “friend” was not awake. He said he would leave us to sleep and he would be back for me. I told him he knew where he could find me, of course. Aoibheann, who is wiser than she lets on to being, laughed as she skipped back to the cavern to get herself something to eat, for the first time since before he turned her to stone. As for me, I stood there for a long time, thinking over what I have just promised myself into. Eventually I tired of my mind leading me in circles and turned back to the cavern. It seemed an ocean away, but really we were only steps from it, the whole time, not that the proximity would have saved us. The Sluagh comes and goes as he pleases, of course. I took a long bath, and then I walked heavily into the sleeping cavern and curled up into the protection of Nathaniel’s arms. I may have cried a little; he did not wake, of course. In the morning, I will have to tell him. I will have a lot to tell him, and he will be pleased about none of it.