So like I said, Nathaniel and I were just standing up on top of the tor, talking. I was thinking about saying we should get back, maybe– to Valene’s, or to the cavern, though I kept feeling funny when I thought about the cavern. But then the bugs appeared. They appeared, and it looked like they were actually harvesting and eating rocks. I had no idea interstellar bugs ate rocks! That is kind of cool. 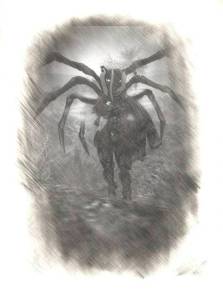 Nathaniel thanked them for returning Paasheeluu’s body — which reminded me, we need to do something about that soonish — and tried to communicate with them a little bit further. I myself am less revolted by them than I was the first time I saw them, so maybe I am learning a little bit. But they still are bugs, and that means I’m still a little bit afraid of them. This is my prejudice, I suppose. Do I ballast myself for still being prejudiced, or do I celebrate the idea that I see my own prejudice and am less bothered by the bugs than I was the time before, and the time before that, and so on?

Yeah, there I go again: wittering.

It was all going very well, I thought, us standing up on the tor by the Seelie sithen entrance, talking to alien bugs; Nathaniel was being a diplomat, and I was still feeling so full of life and energy from my visit to the sithen, there just wasn’t anything that could bring me down.

We turned, and there he was: the Huntsman.

“What fools stand in my path?” he asked. Nathaniel replied that we were just leaving, and I echoed him, though I was too transfixed by fear to move.

He asked for our names, and we gave them. Even the bugs gave a name; it sounded like kzzli- something. I’m sure I’m not remembering it right. 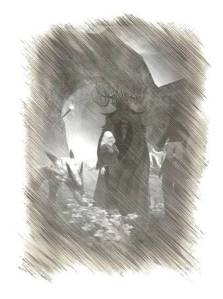 He reached for me, and I knew I was lost.

Nothing seemed real to me at that moment except the Huntsman. I felt very small and insignificant, and I guess to him I must have been. Maybe it was the place, maybe it was that I’d just come back from the sithen, but I could tell he wanted to consume me, break me into nothingness, tear my body apart for his hounds and feast on my soul, like my granny always warned me he would. I saw his smile, his red, impossible eyes, his claws that seemed to lengthen as he reached for me — and he did reach for me. I was frozen. I would have been putty in his hands, I know it.

Only just then, something happened. It was like he suffered a heart attack or something: he grabbed his chest, screamed as if the world was about to end. And then he disappeared into the shadows. 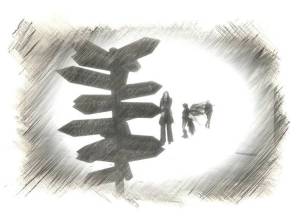 The signpost on the Shadow Roads

Valene always makes me feel like a child: possibly because next to her, I must seem like one. She warned me to be careful of Braeden. Thanks, already knew that. At least Aoibheann is going to be safe, right? At least I did something right. And Valene seemed so tired — her mother, the Crow, had come back and taken her body again, it seemed. I said I wished we could help her somehow, and she gave us both a long hug before leading us back to her den. And didn’t that feel like home, after our encounter with the Huntsman. I was so exhausted by that time I’d almost forgotten about the trip to the Seelie sithen; everything else had just happened so furiously fast I didn’t have time to process the information. 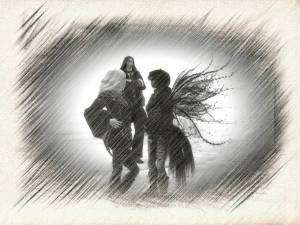 Valene hugged both of us before leading us back to her den.

I told Nathaniel I was exhausted. And I felt exhausted. But I lay awake even after he’d gone disconcertingly still, thinking. Wondering. Worrying.

I want to go back to the Seelie sithen. I can’t stop thinking about it. I can’t stop thinking about the way it felt to be there, how comfortable I was with Bella. I hope the others are like her. I hope I feel that way again. It felt like something I don’t even have a name for. It felt like every bit as much a refuge as Valene’s den has been for me, for both of us, but it also felt like something else, something important. I’ve never felt so much love for a place.